Transit of Saturn: No discussion of Saturn in Indian circumstances would be complete without a reference to his 7 ½ d 2 ½ years periods.

It may be stated at the outset that these periods have nothing to do with Saturn’s period of 19 years. These period may or may not coincide with this period. This period has relevance to the transit of Saturn in zodiac. He transits a sign in about 2 ½ years. When he reaches the 12th sign reckoned from Moon sign the period of 7 ½ years starts. From the 12th house he aspects the 2nd house of the chart and hems ascendant between himself and his ill influence on the 2nd house. After 2 ½ years he arrives in the lagna and thus spoils it. Here also he takes 2 ½ years and has his effects on the native. When he reaches the 2nd house he spoils the 2nd house by his occupation, and 4th, 8th and 11th house by his aspects.

It may be stated that the transit results of all planets, not only of Saturn are to be judged from the Moon sign. It is true that the new practitioners are often confused in such a situation. If we assume Aries as the point rising in the horizon at the time of the epoch that is lagna and Moon occupies Taurus shall the ill period of 7 ½ years start if Saturn comes to Aries. Shall in that case Saturn affect the 12th house or the lagna of the native. These are some persons who reckon the effects both from the Moon sign and sign of the ascendant.

While the importance of lagna sign can not be over-emphasized the Moon sign is also not less important. Moon governs the emotional part of the brain. Some actions are impulsive and Moon gets his importance. Even where impulse is not allowed to govern actions we find that sentiments, sensitivities generates the action and as such Moon comes into play. This is to say that anything that influences our feelings influences our mind or brain and thus the action of the native is important. It is perhaps on this account that Moon sign gets a precedence over ascendant.

While the importance of Moon sign and of ascendant can not be challenged it is our considered view that Sun sign should also be included in our consideration particularly when the effects of Saturn are under judgment. Sun represents our atman or the soil. It is this soul only which takes birth and rebirth to fulfill his desires. We can say that Moon is the desire part of the soul and the ascendant represents the external physical circumstances in which the soul has to move with its vehicle the physical body, Moon, its feeling part and the ascendant the restraining factor upon the freedom of the soul.

Also Read: HOW MARRIAGE LIFE PREDICTION CAN KEEP YOU OUT OF TROUBLE?

This becomes more important in the context of Saturn who is only the other side of the effluent soul. While soul has its innate belief that it can do everything, Saturn by raising the fear complex the sense of limitations taunts the soul or at least tries to taunt the soul and makes it feel incompetent at least to some extent. The relationship of Sun and Saturn can therefore not be ignored. We have expressed our views. The readers and the practitioners may accept them or just ignore them.

While dealing with transits, whether of Saturn or any other planet, we should be very clear as to what the transit mean. Transits have their own effects. They do make the circumstances favorable or unfavorable, helping or obstructing our smooth life but they do not give us that which is not promised to us by our birth chart. This shall become evident when we take to horary astrology. A man is arrested at a particular time from his residence. We draw a map of heavens for that time from his place and tell him what is going to happen to him.

Thousands of person were living near about that place and may be, some persons may be living at that time also in the same premises yet they were not affected. The reason for not being involved is the misfortune of arrest was not indicated in the birth chart of any body else. In short we can say that the bad results on any particular moment of time indicated by the transits should not make us unduly fearful unless the same events are indicated in the birth chart.

The transits indicate precisely the date and the time etc of the event. Without the indications in the charts the indications of the transit may either not materialize or if they happen to affect the native the effects shall come to pass. There was a lady, a senior business executive. Some body told her that her husband would meet with a very serious road accident. She was mortally afraid when she approached us with the horoscope of her husband. There was no such indication in the horoscope. We assured the lady that nothing would happen to her husband. The period passed and the husband did not get even a scratch on his body.

The 7 ½ years of Saturn starting his arrival in the 12th house are significantly important. From the 12th house he aspects the 2nd house, 6th house and 9th house. The second house is of material achievements. Saturn in aspect to this house is of fearful more of his coming to want them than any satisfaction about their abundance. When a very affluent Saturnine is seen to be very miser the miserliness is not because he doubts the abundance but because he is afraid lost he may come to want. His near and dear once become his enemies.

The sixth house is about the place of work of the native, not necessarily his office. He starts doubting every body. This doubting nature and fear complex turns even his friends into enemies. The 9th house which is also expected from 12th house is for the deeds, good or bad, he did in his previous lives and which have come to fruition during the present life span. In his pessimistic way of looking at the things he starts doubting if hid luck is going to sustain him. The affliction of 2nd and 6th house has already shown seeds of misfortune in the 9th house. His aspect further helps in undoing all that reminded there.

From the firth house he directly affects rather poisons the mind. The extent of affliction will depend upon various other factors like aspects, the lord of the house and his relations etc with Saturn. From first Saturn aspects the houses 3, 7 and 10. The lagna means common intelligence. House 3 denotes average intelligence level. When the mind is affected the average intelligence also goes down or at least suffers to some extent. House 7 indicates the person the native comes to deal with. This also includes wife or husband as the case may be.

The relations are at least strained if nothing else. Life becomes a greater hell. House No. 7, on the Bhavat Bhavan principle is 10th to the 10th house which is a karmasthana. Satrun’s ill aspect on both these places spoils the chances of success in attempts with misfortune as its resultant. When Satrun comes to second reckoned from Moon he aspects the houses 4, 8, and 11th. The 4th house stands for the domestic happiness. Eighth house stands for longevity and 11th house for gains. All these houses are affected. Thus during the Sade Sati period Saturn virtually affects all the houses of the horoscope.

Whether it is the natal chart or the chart according to the transits the rules of judgement remains the same. They should be examined after knowing the actual nature of Saturn indicated in the natal chart and then by proper analysis vis-à-vis other planets we should arrive at the correct judgment. It is also important to keep in mind that the relationship of Saturn to the native according to the ascendant and also to the rulers of signs transited by him.

In the case of Venus natives Saturn becomes yogkaraka planet. He will naturally do not great harm to them. The native may be having Capricorn as his ascendant or the moon sign. In such a case Saturn is both a malefic and a benefic. He is the ruler if the death inflicting second house. The results in such a case shall be mixed. Whether Saturn is a malefic or a benefic to an individual he does not give uo his basic trait of being a natural malefic. The only difference that comes about in his gifts or the results is somewhat of moderation in them.

The dhaiya or the period of 2 ½ years comes when he aspects a certain sign. When he happens to occupy the 7th house from lagna or moon sign there is a period of unexpected reverses etc. because Saturn stays in a sign for about 2 ½ years such aspect remains for 2 ½ years only.

The question of sadesati or dhaiyya can also be dealt with as in a sign, in a house and according to aspects. There is perhaps no need to repeat the process once again. Much of the assistance can be had from the foregoing pages. The individual experiences of the astrologers and valued readers will also be good a guide to fall back upon judgements.

Although we have reverted to the question of remedies elsewhere the best suitable that can be suggested here and which is really applicable anywhere else also is to try to have a glimpse into one’s own self and then face the consequences. Saturn is after all nothing but a part of one’s ownself. He is the part of atman, the soul which is not amenable to any external treatment. Mediation and concentration are the best remedies.

Get Solutions For Your Problems, Talk to Astrologer Now

First Annular Solar Eclipse 2021 and Its Effect on Zodiac Signs 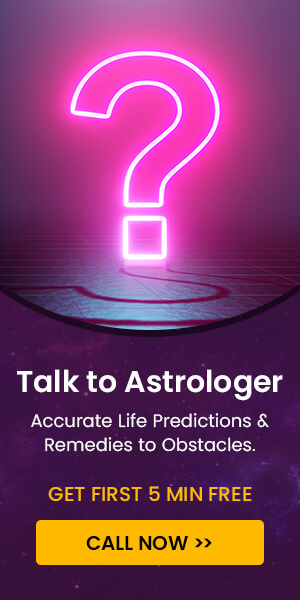